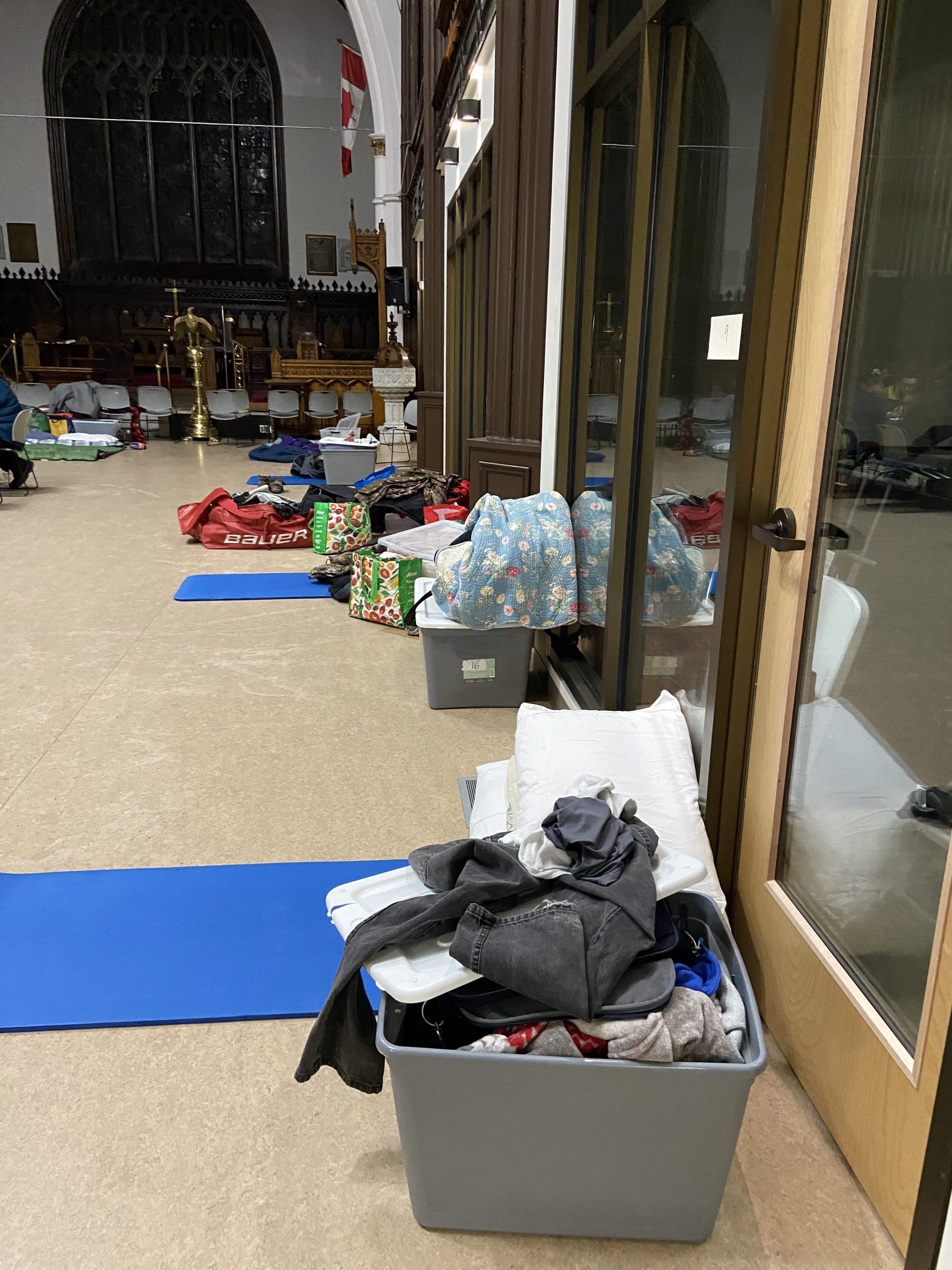 *Thank you to Terence and Jasmine Chandra for sharing this story with us. 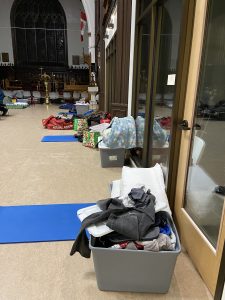 The City of Saint John is at present mired in a mounting homelessness crisis. In the forgotten spaces of our city’s urban core, under bridges and stairwells, in dingy nooks and crevices that only the desperate know, a growing number of unfortunate souls have been forced to make their refuge. Those who labour among them— social workers and nurses, street preachers and activists — are more than well aware of just how serious this problem has become. According to a friend I’ve spoken to in social services, the past few months have seen an alarming rise in cases of hypothermia and severe frostbite. Each evening, the unsung staff of Coverdale and the Outflow Men’s Shelter (God bless them for what they do!) are forced to dismiss perhaps half-a-dozen hapless souls into a cruel and spiteful cold, their limited spaces overtaxed by what has become an excess of need. It was in response to this need that our church (Stone Church) was asked by our MLA, Arlene Dunn, to open a temporary overnight emergency shelter for late January and the whole of February. Although our initial response was enthusiastic, every knowledgeable voice we consulted in the days that followed warned us against such an undertaking. It’s too difficult and dangerous, we were told. You haven’t made the necessary preparations and, by the time you do, the cold season will be over. But, thanks to Provincial resources freed up by the MLA and her office — not to mention a small cadre of truly saintly staff and volunteers — we officially launched on Monday, January 24th. In the days following our closure, some have posed the reasonable question, “Why did you close your shelter at the end of February, with spring temperatures still a month away and so many people in need?” Over the course of the next few paragraphs, I hope to offer a response to this question, and in the process of doing so, provide some greater insight into the complexity and the severity of our city’s homelessness problem.

WHY WE CLOSED WHEN WE DID

To put it bluntly, we closed our shelter because it would have been extremely dangerous for us to continue any longer than what our initial mandate entailed. The homeless population of Saint John (and, I presume, most North American cities) consists largely of people experiencing extreme forms of mental illness— from paranoid schizophrenia to severe mood disorders. If the problem isn’t mental illness, its addiction— intractable addiction to all manner of substances, both legal and illegal: alcohol and prescription pills, opiates and amphetamines. In fact, both the problem of mental illness and drug abuse tend to feed into one another, as people suffering from, say, depression might seek to self-medicate with a whole array of illicit substances. Add to all of this the fact that a number of our guests were once imprisoned for violent offences and then released without secure housing and the result is this: a highly volatile and threatening environment, not only for our staff and volunteers but for our guests as well. I should also note that, in the initial weeks of our operation, we tended to receive clients who had been banned from other homeless shelters for violent behaviour.

SOME OF THE HORRIBLE THINGS WE WERE FORCED TO DEAL WITH 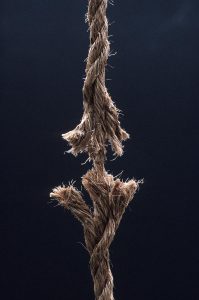 Let us recount just a few of the extremely distressing situations that we had to face over the course of the five weeks of our operation. (Bear in mind, this is by no means an exhaustive list):

• Our security guards had to convince a potentially violent man (possibly in the throws of a psychotic episode) to leave the church in the middle of the night for trying to sexually assault a female guest (a young woman lying defenceless on the floor, high on what appeared to be narcotics).

• One volunteer— an extremely kind and generous woman who routinely worked our graveyard shift— watched as a man with severe frostbite literally collapsed to the floor on his way to the bathroom, his foot finally giving way after months of severe infection brought about by untreated frostbite. An ambulance was immediately called, and he received treatment in hospital.

• A few nights later, that same volunteer sat on the floor for an hour-and-a-half with an Afghanistan War vet as he experienced a vivid and terrifying flashback of his experiences in Kandahar, wondering, all the while, if calling an ambulance would help the situation or only make it worse.

• On a regular basis, our church’s custodian found loose needles tossed carelessly into ordinary plastic garbage bags— despite the fact that there were medical grade sharp containers placed strategically in the bathroom and around the church for guests to use. The dangers that both our custodian and our other volunteers faced in handling these garbage bags is obvious.

Please bear in mind that our volunteers consisted of ordinary people just like you: a retired couple, a music teacher, an engineer, a stay-at-home mom, an accountant, a church pastor and his wife, a short-order cook, a few grandparents— none of whom have been trained in conflict de-escalation, crisis intervention, or emergency medical care. None of them knew how to recognize signs of opiate overdose. None of them possessed any experience in talking desperate people out of committing suicide. None of them knew a thing about calming someone in the midst of a PTSD flashback. None of them were professionally trained in the handling and disposal of hazardous materials. The only resource we had in such situations was calling 911 and prayer (both of which we did repeatedly over the course of the past 5 weeks). In the month during which we operated our shelter, any manner of thing could have gone catastrophically wrong and, not only our staff and volunteers, but our guests would have been the ones to pay the price. The fact that, in the end, no one was hurt is something that we — without a trace of hyperbole — credit entirely to the presence of Christ himself, filling and surrounding each and every one of the precious souls who came in and out of our building. We will repeat this unashamedly to anyone who will listen. Hopefully, this answers the question of why we did not continue to run the shelter for a single day beyond the previously agreed upon five weeks.

Anyone who would fault us for closing our shelter when our allotted time came
to an end – anyone who would demand that our staff and volunteers continue to
expose themselves to such grave risk, night after night, indefinitely – harbours a
near pathological level of callousness that I find impossible to comprehend.”

FINAL THOUGHTS ON HOMELESSNESS AND THE CHURCH 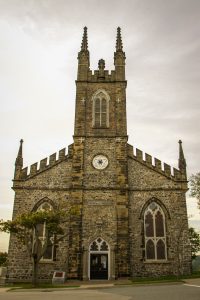 It would be a mistake to perceive the homelessness crisis as a single, isolated problem. Rather, from what we’ve observed, homelessness is the final problem in a long chain of interlocking problems, each of which feeds one into the other to create a pernicious feedback loop. To name only a few examples, there is:
• the problem of untreated mental illness.
• the growing rates of addiction to new, stronger and more insidious drugs.
• the failure of our economic system to provide affordable housing.
• the exposure of small children to highly unstable home environments where
they are extremely likely to experience abuse and neglect.
• the unravelling of our social fabric, leaving the most vulnerable people alienated from the life-giving supports that prevent them from falling through the cracks.
These problems are our collective responsibility. When we fail to address them— when the end result is our fellow human being, passed out on the snowbank, lost in a psychotic break or paralyzed in an opiate haze — it would be unreasonable, indeed cruel, to point to volunteer-based civic groups and simply say, “They’re your problem now. Deal with it.” Rather, the homelessness crisis and all the crises that feed into it upstream must be dealt with collectively, with every sector of society contributing to a solution. Don’t get us wrong. I believe that the church has an instrumental role— if not a leading role to play — in this great, collective work. Despite all we’ve experienced during the past few weeks— despite all I’ve been through over the course of my eighteen years of ministry as an ordained priest— I still believe in the power of ordinary faith communities to effect wonderful change in the broader civic community. This confidence is rooted fundamentally in the work of
Christ and the power of his Holy Spirit— a Spirit working in us to do infinitely more than we can ask or imagine. Now, to answer one final question that no one, as yet, has asked: Knowing what you know now, would you still open a temporary emergency shelter for the homeless?

The answer, of course, is yes.
Terence & Jasmine Chandra