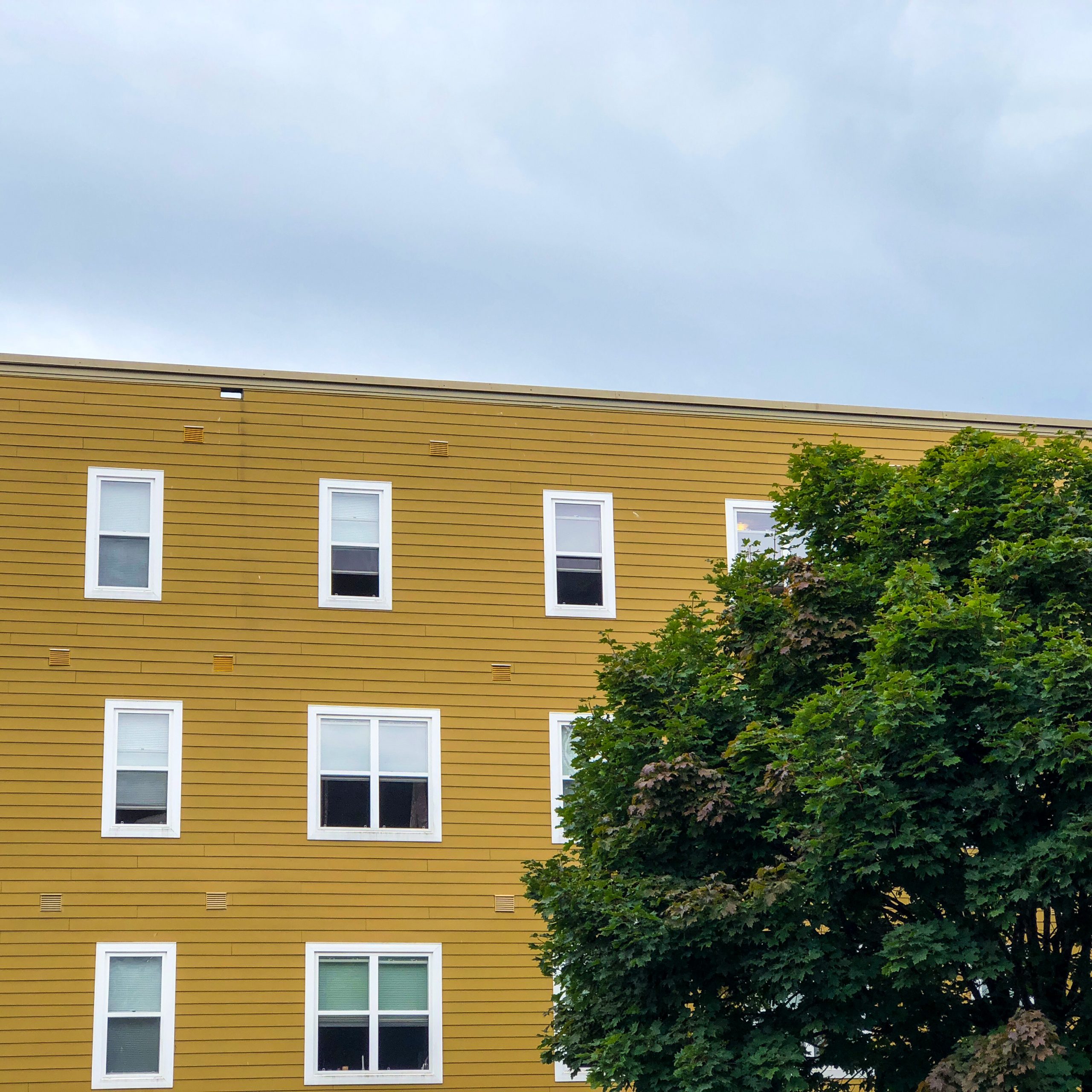 A Coordinated Access System is only as strong as the people doing the work on the frontlines to support our community. We’re fortunate in Saint John to have a strong group of dedicated professionals who care deeply about the well-being of our community and the people in it. In this series, we will dive into the stories of the experts on the frontlines to explore what it means to do genuine community work. 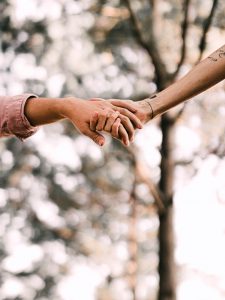 Opening your inbox on a dreary winter day to see the subject line, “Feel-Good Story,” does not often happen in this field, but when it does, it sticks with you.

Receiving an email like this from Misty is par for the course – she is as genuine as they come. The Skillslink Coordinator at the John Howard Society spends her days assisting people with barriers to employment to find meaningful work. She is also a fierce advocate.

It all adds up that Misty’s first foray into non-profit, community work would be International Women’s Day 2 years ago. “My favourite thing about this work is helping people build their voice so they can stand up for themselves.”

Misty sees the gaps in the system starkly and does not hesitate to call them out.

The Feel-Good Story? An incredible example of housing first in practice.

Like everyone working in the homeless-serving sector in Saint John, Misty loves a success story. She was happy to share how the housing first model indeed came into play for a young woman she supported.

“Jennifer (name changed for confidentiality) came with a backpack on her back and little else. She had lost her job, her children and her home due to addiction.”

Jennifer was newly sober after attending rehab. Her story of trauma interwoven with addiction was not unlike the stories we hear each day in the homeless-serving sector. Fortunately, she found Misty. Jennifer was added to the By-Names List and was prioritized for an apartment uptown. Once housed, the pieces quickly fell back into place for Jennifer. She began a program through the John Howard Society and obtained employment in the helping field with Misty’s oversight. Jennifer saved up for a car and worked tirelessly to reunite with her children. 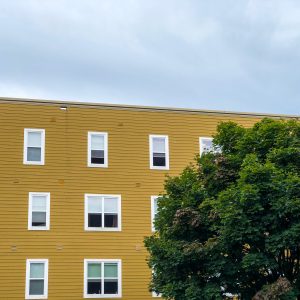 At the one-year mark for Jennifer’s sobriety, Misty brought over a giant cookie cake to celebrate. “For me, the coolest thing is how healthy she looks.” Misty described the joy on Jennifer’s face and the palpable sense of pride she exuded. Jennifer had her apartment looking pristine and thoughtfully decorated, including flowers on the table and pictures on the fridge, small signifiers of a home.

“Every single person deserves to have someone to stand up for them.”

Misty is familiar with the experience of homelessness. Growing up in Provincial care in Ontario as a child, Misty became homeless at the age of 15 and aged out of care the following year. Like many young people, she did not qualify for income assistance because she was not in school. Using her creativity and voice, Misty quickly became a strong self-advocate. When she had children, they became her driving factor. She wanted to build her life up to be better for her kids. 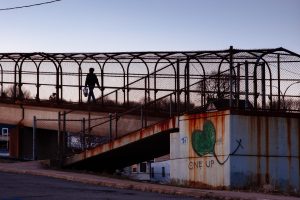 Considering her life experiences, both personal and professional, Misty brings a multi-faceted perspective to her work. Her inspiration now? “A community where I can walk by and wave at my neighbours, where we pick each other up instead of living separately.” And she is taking action to get there.

Many of the folks that Misty works with share that they “Want to give back and help others.” Not every story has a happy ending, but Misty is motivated by the idea of serving people when and where she can. By meeting people where they are and helping them along the path to self-empowerment, Misty believes in a community where mutual aid is the reality.

If you have questions about Saint John’s By-Names List or homelessness resources, please email BNLupdates@gmail.com. 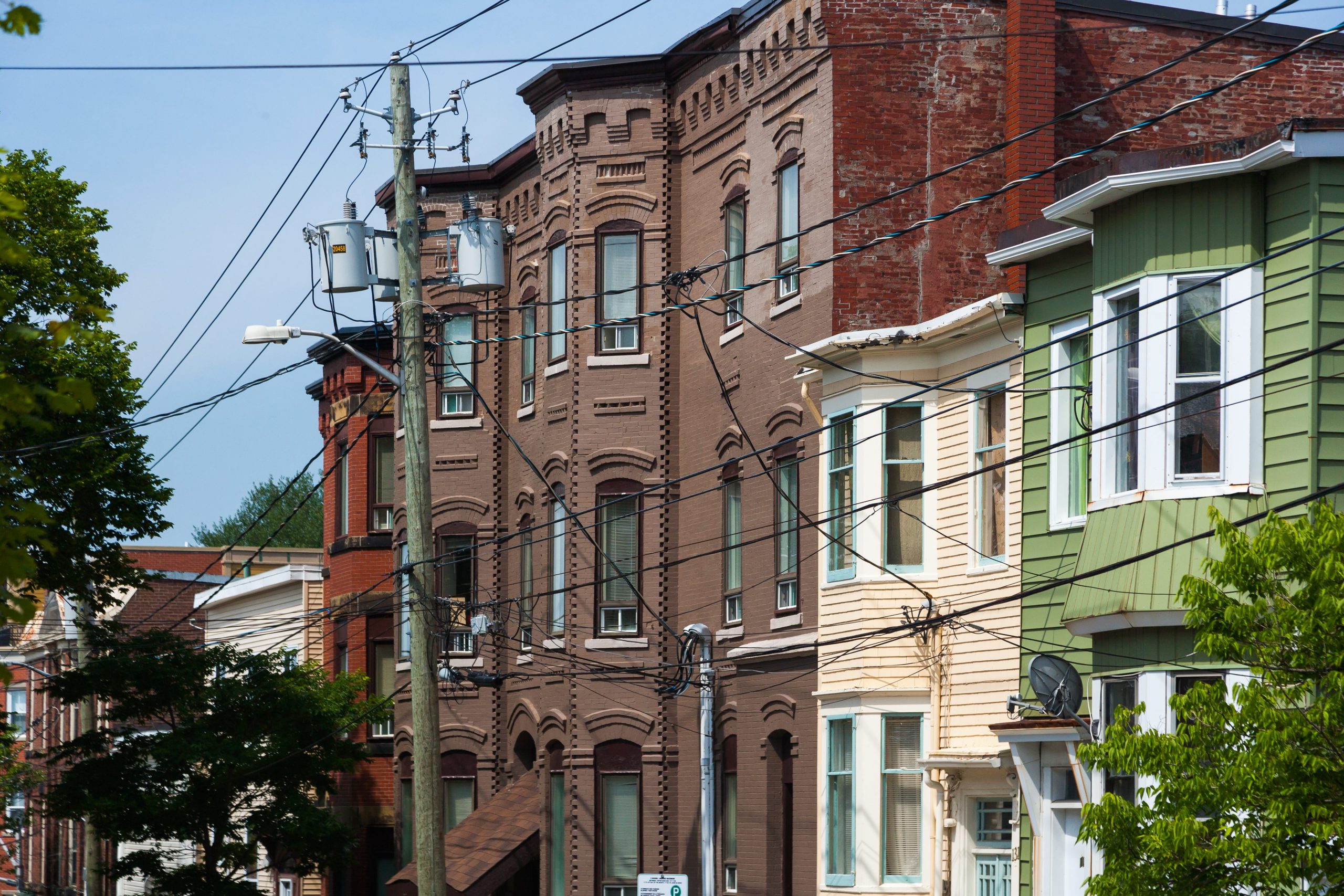 As we reduce chronic homelessness in Saint John, we have used data to determine the next steps. One key aspect of Saint John’s Coordinated Access System is the Prevention Program operated out of Fresh Start Services.

The Backstory: Developing the Prevention Program

Fresh Start is an institution in the Saint John homeless serving sector —since 2009, the powerhouse agency has been working to reduce barriers for women experiencing homelessness. Advocating for people at risk of eviction, standing up for people navigating the social security network and assisting folks in accessing emergency food options are a few of the activities Fresh Start does best. You are in good hands when the women at Fresh Start have your back.

While they continue to provide ongoing support to people in need, the new Prevention Program acts as an integral component to Saint John’s homeless serving system by reducing homeless inflow onto the By-Names List (BNL) and addressing the situational, episodic, or chronic challenges that result in homelessness. The program’s purpose is to maintain or improve people’s current living situations to keep them where they are instead of attempting to re-house them in an over-priced rental market. 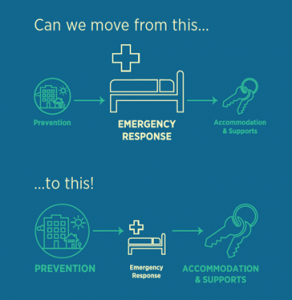 There are three primary approaches to addressing homelessness[1]:

While Saint John’s Coordinated Access System addresses homelessness by assisting people in moving off the BNL through housing, accommodation and support, Prevention targets homelessness by stopping people from being added to the BNL in the first place.

If we can strategically target homelessness from both ends of the spectrum, we are well on our way to ending chronic homelessness in our community. Fresh Start provides Prevention support while other agencies in the Coordinated System such as shelters (Emergency Response) and housing programs (Housing, Accommodation and Supports) make up the other pieces of the system. All components work to manage the inflow and outflow of homelessness. 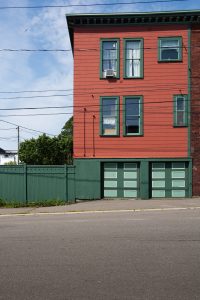 “I can’t always fix someone’s situation, but I can improve their day.” Kristen, Saint John’s Prevention Lead, approaches homelessness prevention collaboratively alongside her clients, “We take those little steps forward together and help them move beyond their current situation.” Kristen has been working in the field of homelessness for three years. Before that, she worked in the non-profit housing field in group homes, emergency crisis intervention and youth observation – she brings years of expertise to the table.

The Prevention Program’s role is to address the situational, episodic or chronic challenges that result in homelessness. “If we can intervene at that point, we can make sure that people do not become chronically homeless,” Kristen says.

Kristen recognizes that not every prevention effort will be successful, but connecting people to the Coordinated Access system can help support prevention efforts. Currently, Fresh Start sees 110 prevention clients monthly, and they have seen an 83% success rate – numbers that demonstrate both the need for and efficacy of the program.

The Public’s Role in Prevention

The public plays a significant role in the prevention program’s success, especially with the increasingly competitive rental market. “Everyone out there is either a tenant or a landlord,” Kristen says that she appreciates the people in the community who are willing to work with Fresh Start to address chronic homelessness and prevent inflow into the system. She is impressed by the response from landlords, the community, and tenants. “They’re the ones who make it work.”

Landlords often need a sounding board to discuss the unique challenges of owning property and housing people. Kristen works closely with property owners to address problems that arise and mitigate issues before they bubble to the surface. She says a key to collaboration is to avoid sugar-coating anything, “Landlords appreciate honesty.” Much of Kristen’s role is to act as a mediator between landlords and their tenants, using her communication skills to break down barriers.

Kristen sees the Prevention Program as a long-term effort towards addressing generational homelessness and poverty. The program works with individuals and families to educate them and provide them with the skills to avoid becoming homeless in the future. “If we can improve their socio-economic status and skills now, we will see fewer individuals entering homelessness in the future.”

It has been a little over a year since the COVID-19 pandemic hit New Brunswick. During the first wave (between February and April 2020), employment in New Brunswick dropped by 50,100 and the unemployment rate reached a high of 13.3% in April[1]. Both the federal and provincial governments quickly put supports in place to help workers when they needed it most and as of October 4th, 2020, 167,360 New Brunswickers applied for CERB or EI[2]. While there continues to be waves of COVID-19 cases in the province, our government has implemented a recovery plan that allows many New Brunswickers to continue working and ultimately allows our economy to begin recovery.

However, the recovery has not been shared evenly among all workers. We took a deep dive into the LFS data to see who has been most impacted, and a few trends emerged. The data shows that low wage workers (those earning less than $15/hour), mothers with children under 12, and lone parent families were hit hard during the first wave and are also slow to recover.

When looking at changes in employment by hourly wage in New Brunswick there was a significant drop in employment during the first wave for all but the top 25% of wage earners. Those in the bottom 25% were hit the hardest (see Figure 1). Nearly one-third of workers earning less than $15/hour lost their job during the first wave. Retail, as well as accommodation and food services were among some of the hardest hit industries, and many workers in these sectors are low-wage workers. According to the LFS, New Brunswick’s median wage in February 2020 for those in the retail and accommodation/food industry was $14.00 and $12.50 respectively.

The recovery for low wage workers has also been uneven. In February 2021, employment among those earning less than $15/hour is still 18.1% below the pre-pandemic level. Those earning $15/hour or more have more or less recovered.

The pandemic has also disproportionately impacted more women than men across Canada. A recent study highlighted that employment losses among women across Canada in March and April 2020 erased 15 years of employment gains[3]. While it does not appear that there are dramatic discrepancies between men and women in New Brunswick (see Figure 2), working mothers with children under 12 have been adversely impacted.

Lone parents have also been slow to recover compared to couples with children under 18. In February 2021, employment among lone parents was still 26.7% below the February 2020 level, whereas employment among couples with children under 18 was 4.3% higher. Nearly 4 out of 5 lone parent families are female led in New Brunswick[4]; just another example of how the pandemic has disproportionately impacted women.

What does this mean going forward?

This uneven recovery highlights several concerns for low wage workers, mothers with children under 12, and lone parents. Many of these workers would have been protected by the Canada Emergency Response Benefit (CERB), however, there are other negative impacts aside from financial stability that job loss and economic insecurity cause. Knowing that certain populations are still without employment there is a real threat that they will be left behind. We need to ensure that New Brunswick’s economic recovery plan focuses on low wage workers, working mothers and lone parents. Failure to account for our most vulnerable workers could have long-term consequences leading to rising poverty rates, an influx into homelessness and increasing food insecurity to name a few, all of which could have lasting impacts on generations to come. 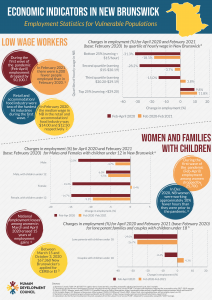